Been using Roll20, and I'll be honest - IF you have to game remote, it's a good toolset.

Scheduling's been hectic since the holidays, but I've gotten a couple of zero-level Dungeon Crawl Classics funnels in and absolutely love it.

I'll be blogging a little more often again, so stick around.

FantasyCraft - Going for a test drive.

A while ago I snatched up the FantasyCraft hardback, and I really like what I see here; It's a rebuild of D&D 3rd edition that gives the DM and players a ton of options.

Expect to see my thoughts soon.

Alts and replacements: A simple system.

One of the things bothering me about later editions of D&D is they seem to expect you not to kill PCs... or players to get bored and replace them.

A good DM will come up with their own system for inserting a new character, but the lack of guidelines and built-in rules means its completely roll your own.

Hackmaster and Adventurer, Conquerer King have a similar system that I'm fond of - in Hackmaster, you devote a % of your experience post-adventure to your protege, in ACKS, a percentage of the loot that you outright BLOW PARTYING is credit towards your replacement.

Nice!  But modern players will hate the former, since it seems no matter how much dead weight a player or character is, everyone is supposed to level up at the same time, and the latter works decent in ACKS - it has one of the best rules-sets for an in game economy I've ever seen - but is also 'uneven'.

I've gone for simple.  From session 0 onward, I've emphasized the guilds aspect of the setting - the King has licensed the adventurer guilds as his agents in the Lost Lands, and PCs are all members of the same guild; as one falls or retires, and guildmate steps up.

(Or even better for alt-oholics, your roster can shift from adventure to adventure)

I've opted for dead simple.  New characters come in at the bottom of the prior 'tier' from the adventurers league: 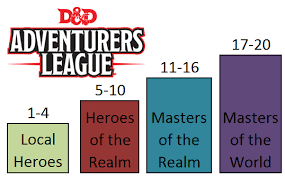 So now that the party has cracked level 11, they can roll in with level 5 alts all day.  Meanwhile they all have a 'main' alt that they adventure with occasionally leveling up on the side.
It didn't come up, but I probably would have been fine with bringing in level 3 alts when they were between 5-10 - you'd be trying to recruit someone that's not totally green.

I was posting over on theRPGsite about death-free PCs and gaming, and to my surprise my normal stream-of-consciousness bullshit actually paid off:

Players that are cool with PC death would DEFINITELY prefer their characters are each riding and blasting/hacking away at a separate one of Tiamat's heads as she plummets towards earth with broken wings while Planars and Solars sing in the chorus*, rather than run over by a drunk gnomes steam apparatus on the way home from the tavern.

That's going in my signature.

Tear it down, build it up Part 1: Hidden Shrine of Tamoachan

Like most DMs, especially grown-ass adults that have jobs, there's only so much time to prep.  If you even HINT that the weekly game is going bi-weekly that table full of serial killers in waiting might decide to start on you!  So maybe you reach for help in the form of a published module.

I may or may not have mentioned that I'm running Tyranny of Dragons.  Thematically, it fits my setting, and I've always wanted to use Tiamat as a big-bad.  Hoard of the Dragon Queen wasn't bad - Rise of Tiamat SUCKS.  Put a pin in that, I'll be going into detail later.

So far, all the modern modules (2014+) I've looked at, has been a bloated mess with one exception: Tales from the Yawning Portal - which sounds like a BOREDOM INDUCED title that had to get its Misbegotten Realms pecker trails all over modules that had nothing to do with Faerun.  The only reason the bloat is minimal is that it's a reprint of far better modules with minimal work done to bring them up to 5th edition.

It still manages to shoe-horn some bullshit about a bar built over a dungeon, with an immortal bartender, since the Realms is all about cherry-picking and mashing together better ideas until they suck.

As mentioned previously, I feel modules should be MODULAR.  I don't give two shits if Ed Greenwood wrote the module and wants me to give me the guided tour of Elminsters shoe room; I better be able to make it into the home of some other Gandalf rip-off easily, or I could have just written the adventure myself.

Since I'm working within a time limit, I use them.  I'll touch on some of what I've done, and will be doing, with various modules.  I'm going to start with an easy one - easy because for my particular campaign, it required minimal changes:  Hidden Shrine of Tamoachan.

First problem:  No way the party would detour far enough south in the campaign wurld to get to a jungle.

Ok.  Hmmmm.  I do a quick review of my setting notes - the wood elves were the original nomadic dwellers in the region, became decadent and civilized (they so often come together), and over two centuries got thrown down by the high elves and their newly-created dragonborn footsoldiers.

Sweet.  I see an angle already.  Wood elves like woods.  Evil blood-demanding gawds love blood and sacrifices, and tell their grugach worshipers, 'build us a pyramid'.  The grugach do, and with proper sacrifices the jungle starts to grow out from the pyramid.  Soon I have pointy-eared blood-priests spreading fear and jungle in my wurld history.

This gives me the option of slapping these bad-boys down in other terrain, with hints of the former green glory... and suspicion and fear when they find one in a thriving jungle - because that means the blood is flowing!

Great!  So from here, I ditch the 'fell in a hole' start and make it a bizarre hidden snake tunnel mosaic connected to a nearby tomb, leading to room #1.  A little bit of care describing the murals as pointy-eared assholes, instead of round-eared assholes, toss in a series of murals of the dragonborn as footsoldiers to the high elves (which was, at the time, a secret) and voila!  It fits into my campaign and actually adds cool stuff for when the adventure is over.

Fuck WoTC for not reprinting the original handouts by the way.  Some of the new art is GREAT... but impossible to use without work.  Get the original (even if its just for the handouts) at Drive-thru RPG ($4.99 at the time of this post) and if you're willing to do the conversion work, skip the WoTC reprint.  The maps are shit in the scan; but there are nice options online.

Alright, that's it for now.  Next time, I'll take a look White Plume Mountain and how it's tied into my game wurld now.

I've been under fire by my liberal friends* because I have a habit of giving other adults benefit of the doubt, and expecting the same.

The latest shitstorm has been going on for months, and no-cost me a player at the table, although her husband has stuck around (awkward).

It started with the Orc Lives Matter assholes.  In short, if I describe something as primitive, violent, and savage, the racist lefties brain pops to 'OMG he means black people'...

I'm archiving my side of the story here, so I can stand by my words for better or worse, as my cousin deleted the conversation on Discord.

I lead in with a link to the article here:
Stop with the inclusivity! Only FAN GATEKEEPING can save our favorite nerd passions – from D&D to Star Wars by Sophia Narwitz

It's an Op-Ed.  The key point I agreed with was thus:

it’s up to long-term fans to shut down those who want to forcefully enact change. So, for as much backlash as the woke crowd is already receiving, they need to get even more of it. These people don’t deserve to feel welcome in our hobbies. There is no place for them here.

Sounds pretty harsh out of context, I admit.  I clarified - People that want to come in and ignore/destroy the past of a franchise (usually because they aren't creative enough to compete) should be kept the fuck out.  Full Stop.

Mind you, if you read the article, it lays it out.

Here's the funny part, I got attacked initially because I didn't vet the source - apparently it's a Russian Bot site.

It's an Op-Ed.  What exactly do you 'fact check' on an opinion?

So going back into Facebook I see some smears and libel on my posts, so I updated with a couple of classics: 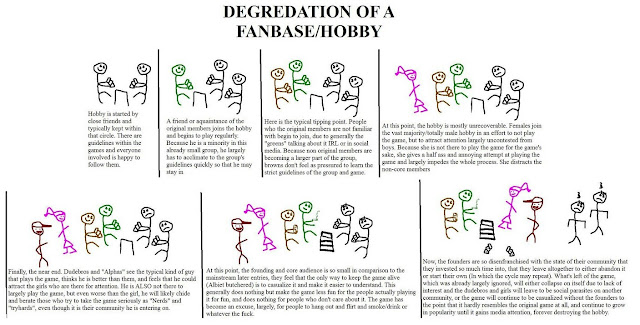 I've never once, and never will, keep someone from playing 'the' game the way they want at their table.

I've never once denied someone a seat at my table because of their beliefs, race, sex or who they prefer to have sex with.

I -have- and will continue to restrict my table to people that will bring something to the game and NOT DISRUPT IT. 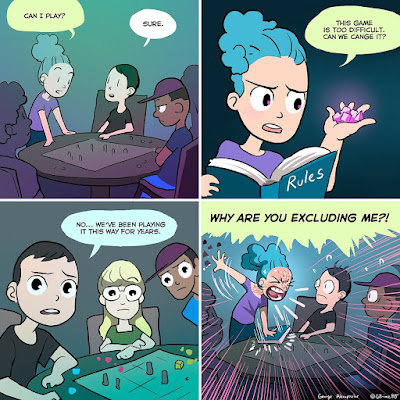 *who have no problem misquoting me online, taking what I say out of context, and stirring up shit - in a word, facebook.

Gawd, I'm like a junkie missing his fix...  theRPGsite is in the process of updating their website and while I was able to access it for a couple days, I'm locked out again.  <naturally, at the time of this post, it's back up>

So while that's' down, here's a couple blogs I've dug into:

((nil) is (not(null))) - not just RPG topics, his very well thought out OSR are good stuff.

Goblinpunch - has been previously mentioned.

Against the Wicked City - specifically this post on the OSR aesthetics of ruin.